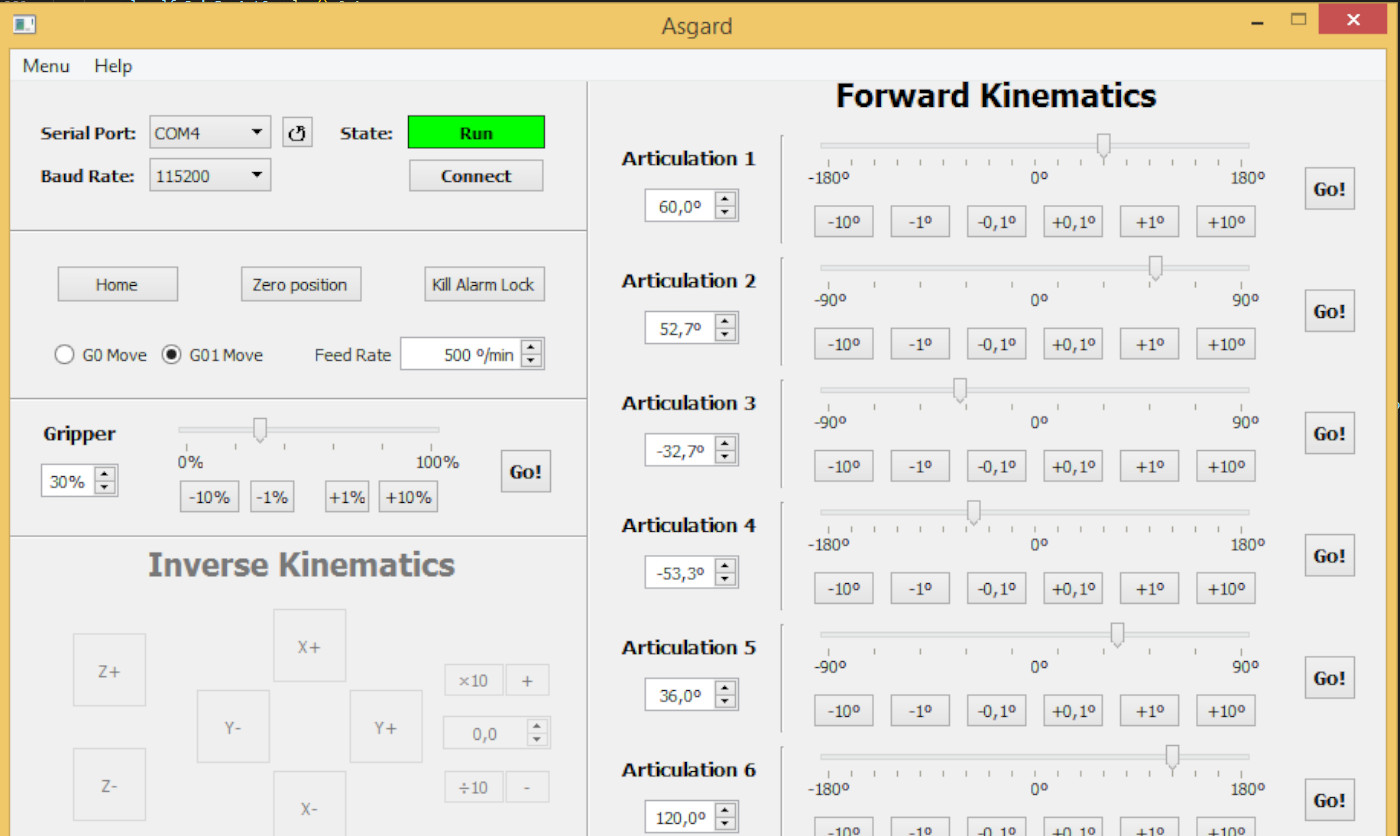 Controlling a machine by sending GCode commands through the console is not the most intuitive thing to do.
That’s why there are graphical interfaces such as Universal GCode Sender that make this task easier. Unfortunately, as UGS was designed for controlling CNC machines, it doesn’t support control for more than 3 steppers.
Based on this idea Asgard was developed.

Asgard is a Graphical User Interface (GUI) made for Thor, programmed in Python using the PyQt5 libraries.

As it’s a python program it doesn’t matter what OS you use, all you have to do is install Python 3 and execute Asgard. To do so, follow the instructions below:

Although the programme is quite easy to use, it does not hurt to explain each of its features.

Serial Port: Combo box to select the port the board is connected to. The button on the side is used to update the port list.

State: Display that shows the current state of the board (Disconnected, Idle, Run or Alarm).

Connect button: Once the serial port is selected, click it to establish the connection.

Kill Alarm Lock: When the homing cycle fails, the Alarm mode is activated and the robot movements are blocked. This button runs the command to kill the alarm lock ($X).

Each articulation has three different ways of introducing the target angle (input box, slider and buttons) and a “Go!” button to move the articulation.

Go All! button: Instead of moving each articulation individually, this button sends the movement command to move all articulations at once.

Angles Display: This display shows the current articulation angles of the robot.

Similar to Articulations FK control, there are three ways of inputting the signal controlling the robot tool and a “Go!” button to send the command.

At the bottom there is a serial console, similar to the Arduino’s one, that shows every command sent to/from the board. There is also a text box where commands can be type and a “Send” button to send it to the board.

Show Verbose Output: This checkbox allows you to show/hide the verbose messages sent by the board containing the status and position information.

Show ‘ok’ responses: This checkbox allows you to show/hide the ‘ok’ Responses sent by the board.